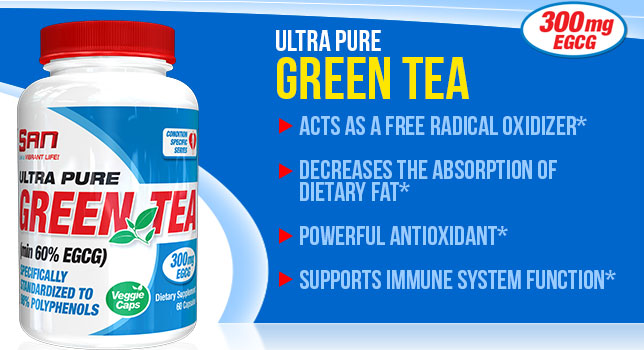 Ultra Pure Green Tea EXTRACT has many mechanisms of action in stimulating weight loss and acting as a free radical oxidizer. The most important mechanism is probably the inhibition of catechol-O-methyl-transferase (COMT) by EGCG [Chantre P, Lairon D, 2002]. COMT is the enzyme that breaks down norepinephrine (NE), one of the body’s most important lipolytic hormones. Although the EGCG catechin is the most responsible for weight loss, some flavanoids found in small amounts in green tea such as quercetin and myricetin also inhibit COMT and may play a more minor role for liberating fat loss [Dulloo AG, Duret C, Rohrer D, Girardier, 1999].

Ultra Pure Green Tea A is also a potent appetite suppressant. This can be partly explained by the fact that it increases both NE and dopamine [Yokogoshi H, Kobayashi M, Mochizuki M, 2002], but further mechanisms of action have been postulated. Specifically, tea polyphenols have been known to elevate levels of cholecystokinin (CCK) [Liao S, 2001], a hormone, which depresses food intake [Liao S, 2001]. It is not yet known whether this plays a significant role in the action of green tea, and one of the effects of elevated CCK is an increase in pancreatic lipase, which is actually inhibited by green tea. It could be that green tea simultaneously elevates CCK and decreases pancreatic lipase, conferring the benefits of both appetite suppression and decreased fat digestibility.

Besides its Lipolytic (Fat Burning) properties, Ultra Pure Green Tea is documented to possess powerful antioxidant properties, plus it has been shown to support ones immune system function as well as prevent cellular damage caused by free radicals. Use Ultra-Pure Green Tea for fat burning or simply as a free radical scorcher.